Buying a Mosquito Police location is a decision that shouldn’t be taken lightly, just like any other investment. Here you can learn the key facts about Mosquito Police before making your final decision about buying a franchise location from them.

What is Mosquito Police?

Mosquito Police is a top mosquito and tick control company that seeks out other entrepreneurs looking to make a difference in the community. They offer a business model to potential franchisees that will allow them to enter a lucrative industry for way less than their competitors.

The industry Mosquito Police is part of, is usually referred to as pest and mosquito control—or management. It is the control or regulation of a pest species, which is an animal that has a detrimental effect on human activities. Exclusion, repulsion, physical displacement, and chemical control are all used to eliminate them.

What Does a Mosquito Police Franchise Cost?

The cost of establishing a Mosquito Police franchise or location is dependent on a number of factors, and each franchise is unique in this regard. There’s also a distinction to be made between opening a whole new company and simply rebranding an existing one.

Cost of Starting a Business

You’ll need money and time to start and run a mosquito control business. While starting a business is an exciting operation, it is also costly. It’s critical to be reasonable when estimating startup costs for a company. Expenses such as office space, legal fees, payroll, company credit cards, and other administrative costs can add up quickly.

By franchising with Mosquito Police you can lower some of these costs and only have to invest in an initial franchise fee and extra investment for supplies and equipment.

According to the Small Business Administration, there are many forms of expenditures to remember when beginning a business. To better control the business’s cash flow in the short and long term, you must distinguish between these costs.

Mosquito Police franchise can count on their franchisees to give a good, or great, word on their behalf.

Mosquito Police promotes itself as a high-performing exception within a very lucrative and growing pest control industry.

Mosquito Police has 30 locations in the U.S. and growing.

Cost of Rebranding a Business

While rebranding a location can save money, particularly when leasing or building a new location, there are still costs associated with it. A single-territory franchise location for Mosquito Police comes with a variety of charges, as well as subsequent payments, such as supplies, preparation, and other startup costs. A double-territory franchise has marginally higher prices. If there is a low risk in the rebranding procedure, you can expect to invest from 1 to 3% of the possible cost to your company, and if the stakes are high, you’ll want to invest 5 to 10% of the possible cost to your company.

The advantage of franchising over starting your own business is that you will receive help and will not have to deal with the day-to-day issues that a startup faces, such as planning a business plan, procedures, finding suppliers, and considering a brand. While some experience in the mosquito or pest control industry is beneficial, a basic understanding of mosquitos and pest control is all that is needed. A franchise could provide you with training if you’re just getting started and want a full business setup. A Mosquito Police franchise has many advantages over starting your own company, particularly in terms of the existing brand you’ll be joining, the know-how, the structured procedures, a brand consumers trust, and other factors.

As a Mosquito Police franchisee, you will have the opportunity to participate in the mosquito and pest management industry growth, and you will just have to think about setting up and operating the franchise effectively. The business model has already been developed! Brand recognition will come easily.

As previously mentioned, being a franchisee in the mosquito control service industry means that you are buying into the franchise’s existing confidence. You won’t have to worry about putting in the effort required to earn a customer’s confidence in your brand. You’re paying for the right to use the Mosquito Police logo and brand recognition.

What is Included With A Mosquito Police Franchise?

Being a Mosquito Police franchisee comes with a lot of responsibilities but also benefits, which include: 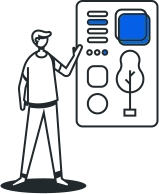 A Mosquito Police franchisee candidate must be hardworking, goal-oriented, and capable of being proactive in searching for new ways to develop the franchise as a whole. Above all, the franchisee must make certain that they understand the mosquito/critter management business model and culture.

Mosquito Police franchisees must have a strong entrepreneurial spirit even if it’s not their own company, as each franchise location can be just as challenging as a new company. Entrepreneurs looking to make their way into mosquito and wildlife management must have a quick problem-solving and occasional innovation attitude.

Any business needs professionalism, and the mosquito or pest management industry is no exception. Good communication, honesty, hard work, and respect for procedures, as well as the duties of managing a Mosquito Police franchise site, are all important aspects of franchising.

Having expertise in the mosquito control industry is an advantage, or having the skills necessary to excel in it, but it is not a specific requirement. Becoming an expert may come by itself in the journey of getting a Mosquito Police franchise.

The salary of a Mosquito Police franchise owner will depend on the location and other considerations, but if both you and the franchisor perform your duties when you decide to franchise, you will gain a lot of business and growth benefits.

Stay on the front lines of franchise opportunities, news, and my educational webinars.